“I really got goose bumps.” “I’m going to cry!” What moved the students so much? Tzu Chi University’s Office of International Affairs (OIA) held a Malaysia Lunar New Year event and invited Malaysian students to prepare a hometown reunion dish called ‘Loh Sang’(‘撈生’). Malaysian students who had not been home for a long time due to the epidemic were all very emotional when they tasted the hometown dish!

Similar to the reunion dinner on Lunar New Year in Taiwan, the Malaysian Chinese also will have their reunion dinner, but they wil have a special dish, which is called ‘Loh Sang’, a dish with more than 30 ingredients, each of them has an auspicious meaning, such as vegan sashimi (which has the meaning of ‘nian nian you yu’, meaning “abundance throughout the year”), shredded carrots (‘hong yun dang tou’, symbolizing “good luck”), sesame seeds (‘zi sun man tang’, meaning” be blessed with many children”), cucumber (‘kai hua jie guo’, symbolizing for “hard work will pay off”), yellow corn (‘jin yu man tang’, symbolizing for “good and wealth”), apple (‘ping ping an an’ for “safe and sound”) and so on. The special sauce includes a mixture of sour plum, honey and five-spice powder. The ‘Loh Sang’ is actually an act, where everyone around the table picks up chopsticks and mixes (by throwing up, as the word ‘Loh’, ‘撈’ meant) the ingredients together while saying auspicious words such as “Loh Sang”, ‘bu bu gao sheng’ (“journey to the next level”), ‘nian nian you yu’ and ‘gong xi fa cai’ (“good and fortune”).

The Malaysian students had to go to several stores to get all the ingredients, and they were all very excited to have their first “Loh Sang” at Tzu Chi University, and they worked together to make the students of Tzu Chi University feel the atmosphere of their hometown for Lunar New Year. Shi-Yuan Fang from the Department of Molecular Biology and Human Genetics said that her family has a large number of members, she used to spend Lunar New Year’s Eve with her cousins, there were as many as 20 people, one table for young people and one table for adults. Since the bigger the action (‘Loh Sang’) is, the better the blessing, therefore every time the children’s table is full of ingredients (throw out from dish)! “But it was fun, we all played together”, said Png Sze Yen.

Most of the students who came to the event had never heard of ‘Loh Sang’. They were all curious about it and looked forward to it. Shi-Feng Lin from the School of Post-baccalaureate Chinese Medicine said, “I don’t know what is ‘Loh Sang’ before, (but) there are many international students at Tzu Chi University, and this is what unique about our school, so I came with my classmates to experience the activities of different country.At each table, there was a colorful dish,  “Loh Sang”, and the organizer provided chopsticks so that everyone could participate in this activity. With the call of “Loh qi! Loh qi!” (“撈起!撈起!”, which means “throw up!throw up!”) , the students said out loud the words ‘xue ye shun li'(“Good luck in your studies”) and ‘nian nian you yu’, and had a great time experiencing this special Malaysian event.

The Office of International Affair invited the Malaysian students to introduce their New Year activities to non-Malayasian students of Tzu Chi University. In addition to the ‘Loh Sang’ activity, Kelly Chern Weei Xuan introduced the culture and ethnicity of Malaysia. Malaysia had  three major ethnicity, which are Malay, Chinese and Indian. The people of these ethnicity had their own important festival, for example, Malay had Hari Raya Aidilfitri, Indian had Deepavali, Chinese had Lunar new year (also known as Spring Festival). Each festival has different characteristics, food and activities, which represent the multicultural side of Malaysia. In addition, The Office of International Affair also prepared Malaysian desserts and traditional foods such as banana sticky rice rolls, Nyonya nine-layer cakes,  curry puffs, and Bubur cha cha.

Wong Win In from the Department of Digital Media and Technology, a Malaysian student who has not been back home for more than a year. Last year he was spent his Lunar new year festival alone, he said, “I miss Malaysia very much, especially when I heard the Malaysian Lunar New Year songs and ate the Malaysian hometown food, I was very happy and touched”. In the past, Malaysian would have ‘Loh Sang’ with their families and friends, “Loh Sang” is symbolic as ‘reunion’.

Nearly 100 students and teachers from Taiwan, Hong Kong, Malaysia, Indonesia, Nepal, Ukraine, Singapore and other places came together to participate.  the Associate Professor and Chairman of the Department of  Molecular Biology and Human Genetics ,Peng-Yeong Woon, who is also a Malaysian said that, this is the first time he ate “Loh Sang” in Taiwan, and he appreciate the great effort of the students on the preparation of this special dish. 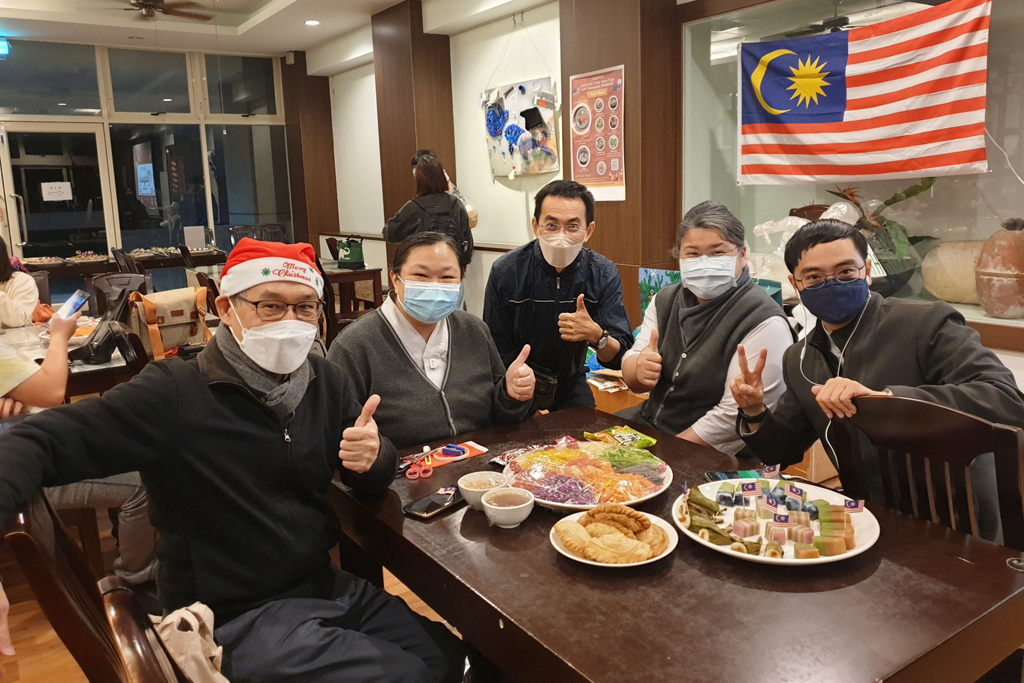 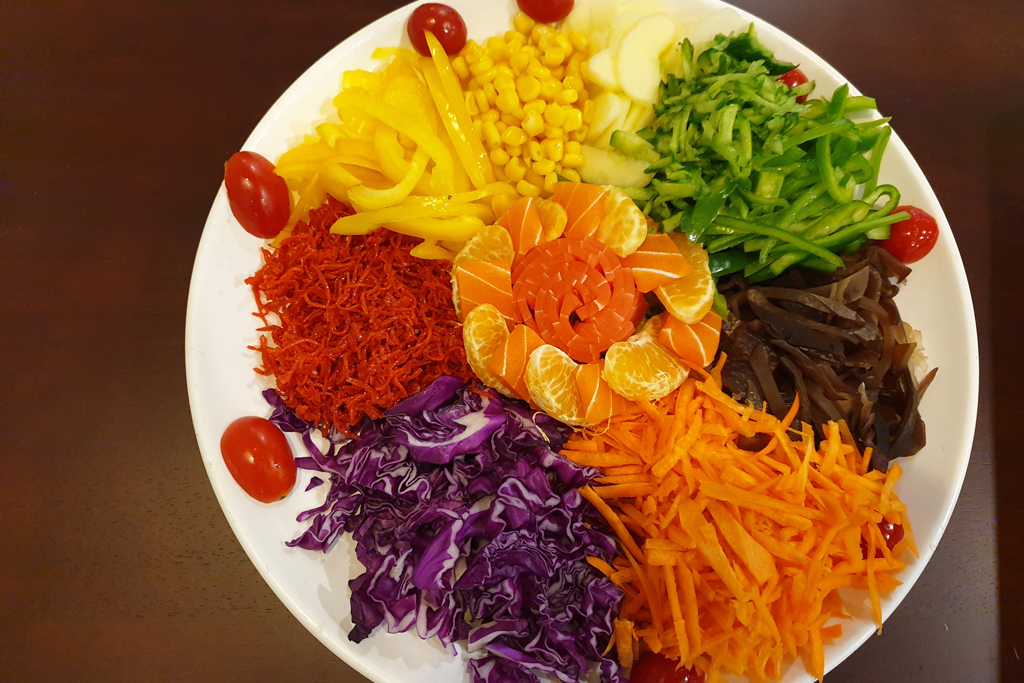