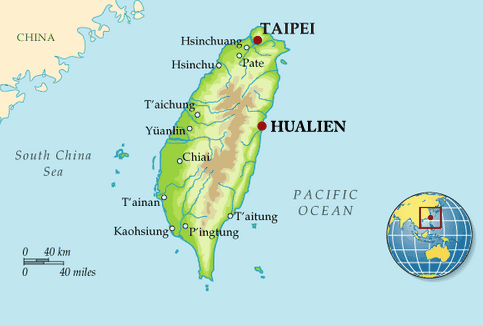 Hualien is eastern Taiwan’s second largest city and one of the more pleasant small localities in Taiwan. Many travelers like to base themselves here, even when Taroko Gorge is their interest, as the range of food and accommodations is greater. Budget travelers will find everything they need near the train station. Head east to Meilunshan Park (Měilúnshān Gōngyuán) and the harbor area for wide streets, landscaped parks, bike lanes and ocean views, in addition to boutique hotels and pricier restaurants.

Hualien means ‛eddies’ in Taiwanese and the story goes that Qing Dynasty (1644- 1912) immigrants gave the region this name after noticing swirling waters off the coast. Though much of the city’s wealth comes from tourism, local deposits of limestone have also made Hualien the cement capital of Taiwan.

Road signage in Hualien is a mixed bag. Don’t be surprised if “Jung Shan” is written 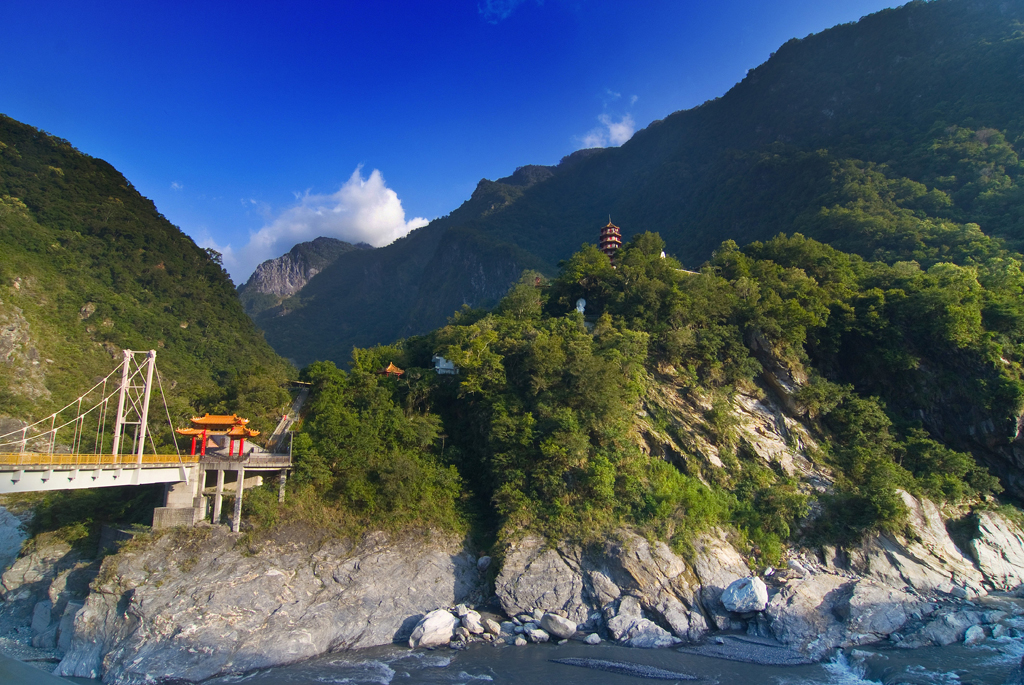 Taroko National Park is one of nine national parks in Taiwan, and is located in eastern Taiwan.

The Liwu River cut its channels through layer after layer of rock, while the Central Mountain Range rose up, and as a result, magnificent gorges were formed. Taroko’s narrowed V-shaped marble gorges, with over 1,000 meter (3,000 feet) deep canyons, and more than 1,000 meter high mountains, stretch more than 10 kilometers.

Malongayangay used to be on the eastern side of Hualien Airport, and it was a big lake looking like the Big Dipper. The northern end was the Big Dipper’s bowl, and its southern end was the handle. Taiwan was under Japanese rule from 1895 to 1945, and in order to build an airport in 1936, the Japanese initiated a landfill project. As a result, a large lake was turned into four scattered ponds.

Residents living in Malongayangay were asked to move to Cikatingan by the Japanese. They missed Malongayangay, so they renamed Cikatingan Malongayangay. Today Malongayangay faces the Pacific Ocean, and its ground is covered by gravel. The deep ocean is nearby, plus the Kuroshio Current flows along its coast, which attracts many types of fish to migrate on a regular basis. Thus, Malongayangay used to be a booming fishing town, and people used fixed-nets to catch fish. 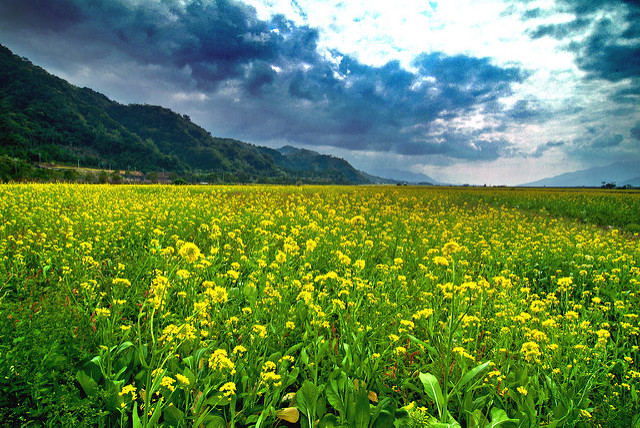 East Rift Valley is sorrounded by Central Mountains in the west and Coastal Mountains in the east. Hualien River, Xiugulan River and Beinan River, originating in mountains ranging from 2,000 to 3,000 meters (6,000 to 9,000 feet) in height, flow through this area. As a result, a flat landform was created by the deposition of sediment, carried by these rivers, over a long period of time.

Many towns in this area produce high quality rice, and when Taiwan was under Japanese rule, Chishang’s rice was presented to the Emperor of Japan every year. When not growing crops, some farmers grow rapeseed flowers and others plant orange daylilies. In January, rapeseed flowers blossom in Satokoay, Luyeh and Chishang, so these towns sponsor outdoor activities, enabling visitors to appreciate their beauty.

In April and May, many fireflies show up in Liyu Lake for mating. In July and August, harvest festivals are held by Amis tribes people in Hualien and Taitung Counties to celebrate their harvests. In August, the International Paragliding Competition takes place in Luyeh Township, Taitung County. In September, orange daylilies blossom beautifully on Chike Mountain in Yuli Township and on Liushidan Mountain in Fuli Township, with both places situated in Hualien County. In December, Puyuma tribes people in Taitung County celebrate their Hunting Ritual. 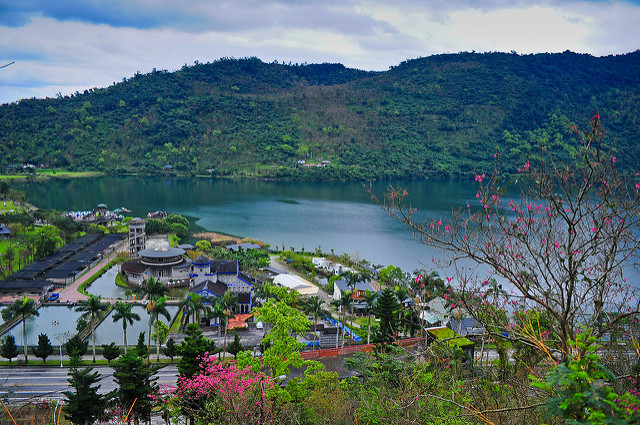 Liyu Lake is in Shoufeng Township, Hualien County, and it’s situated at the northern end of the East Rift Valley National Scenic Area. This lake is oval-shaped, with an area of 1,040,000 square meters (256 acres). The lake’s deepest spot is 15 meters underwater, with its water coming from an underground spring. Consequently, the lake is clean year round.

The lake is beautiful and both its environment and water quality are well maintained. In recent years, Liyu Lake has been the site of the Firefly Festival, sponsored in April and May every year, to familiarize visitors with the lives of fireflies, and share efforts in environmental protection and nature conservation. 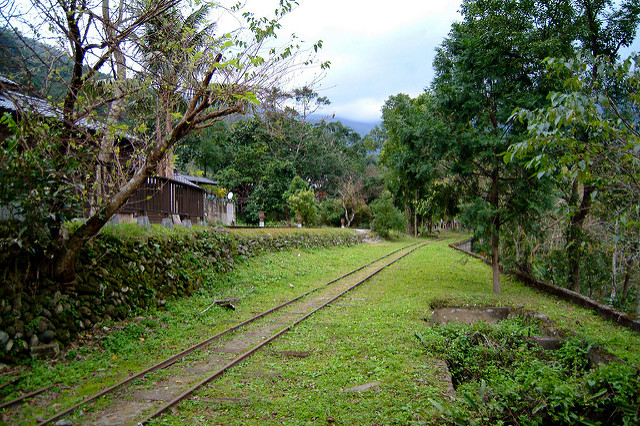 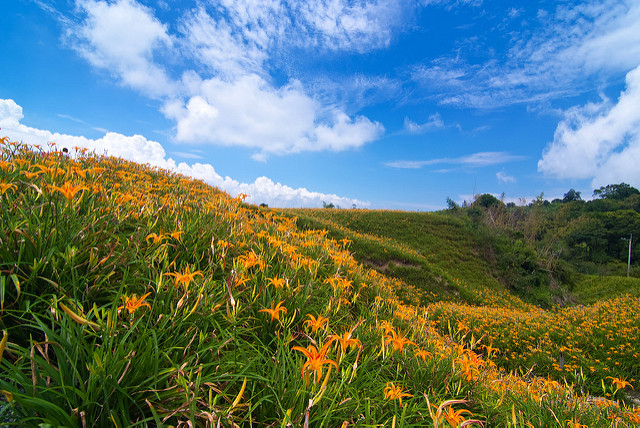 Farmers of Liushidan Mountain grow their orange daylilies organically. Orange daylilies bloom from July through September, and this is the best time to pay a visit for appreciating their beauty. While orange daylilies are everywhere, they are like carpets with orange-yellow colors, and grow among on the green grasses, in the woodlands, on house rooftops, or in gardens. 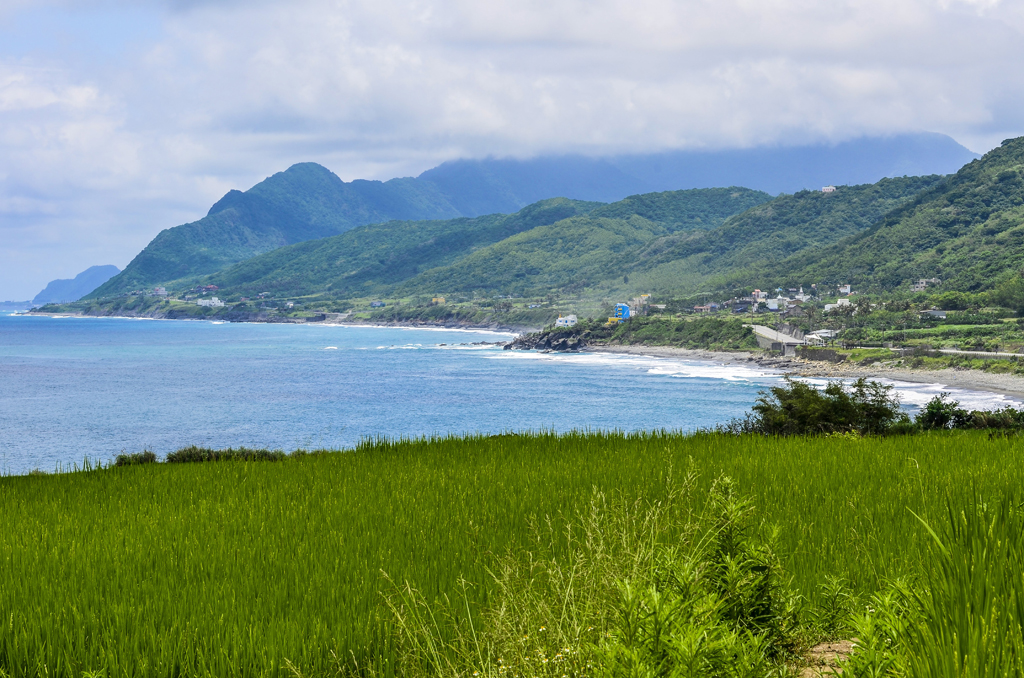 The East Coast National Scenic Area was established in 1987 and, suprisingly, Green Island has been a part of it since 1990. This area stretches from the mouth of Hualien River in the north to Xiaoyelio in the south.

This area is bounded by the Pacific Ocean in the east and the Coastal Mountains in the west. It is situated in the region of active deformation, from the coast of Hualien County to the mouth of the Puyuma River in Taitung County, where earthquakes take place very often. Shale that has been pushed upward is still being pushed upward by tectonic action, and plate collisions, along with marine erosion, has produced a wide range of landforms here, including coastal terraces, sea-eroded platforms, trenches and caves. 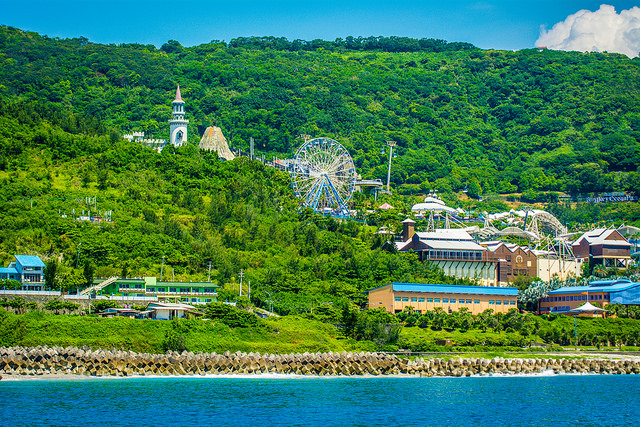 Farglory Ocean Park is also named Hualien Ocean Park. Situated in Hualien County, Hualien Ocean Park is only 10 kilometers from Hualien City, and it is about a 30 minute drive away. The park covers 510,000 square meters (126 acres), is Hualien's biggest man-made tourist attraction, and Taiwan’s first theme park focusing on marine ecology. Hualien Ocean Park features eight zones that introduce different aspects of ocean and marine life. From thrilling water rides, bumper boats, dolphin shows to roller coasters, everyone can have fun in this amusement park. Moreover, visitors will be astonished by the dolphin’s and seal’s amazing acrobatic abilities in the aquatic shows. 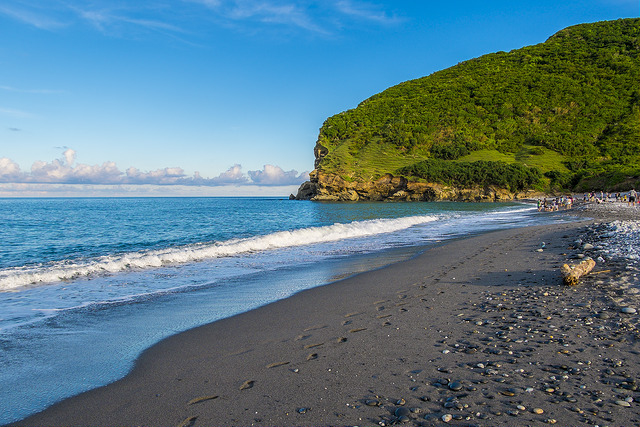 “Niushan Huting” translates to Cow Mountain, which is a rather odd name for a beach, one would think. Yet, long ago, before this area was on the map, the rolling green hills surrounding the small bay were a place for Amis tribes people to graze their cows and other livestock. Taiwanese lilies originate in this area, and they blossom everywhere in spring. Niushan Huting has a bountiful variety of plant species, so it has been designated a nature reserve since 1987.

Silence is a 2016 historical period drama film directed by Martin Scorsese, with a screenplay by Jay Cocks and Scorsese, and based on the 1966 novel of the same name by Shūsaku Endō. The film stars Andrew Garfield, Adam Driver, Liam Neeson, Yosuke Kubozuka, Tadanobu Asano, and Ciarán Hinds. 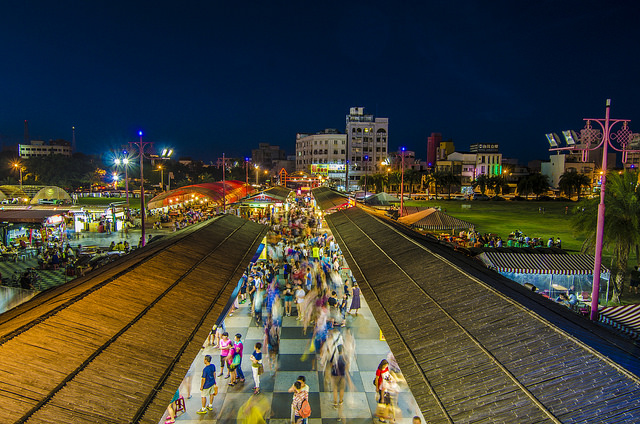 The largest night market in Hualien, Tungtamen Night Market is a part of the 6th re-zoning area, located near the downtown area, and specifically, it is to the west of Zhongshan Road and south of Chongqing Road.

The three main market lanes are Futing Market (Taiwanese food), Indigenous Street (indigenous food), and a street serving foods from all the provinces of mainland China, and these lanes accommodate more than 400 shops. Visitors may try all kinds of food here. 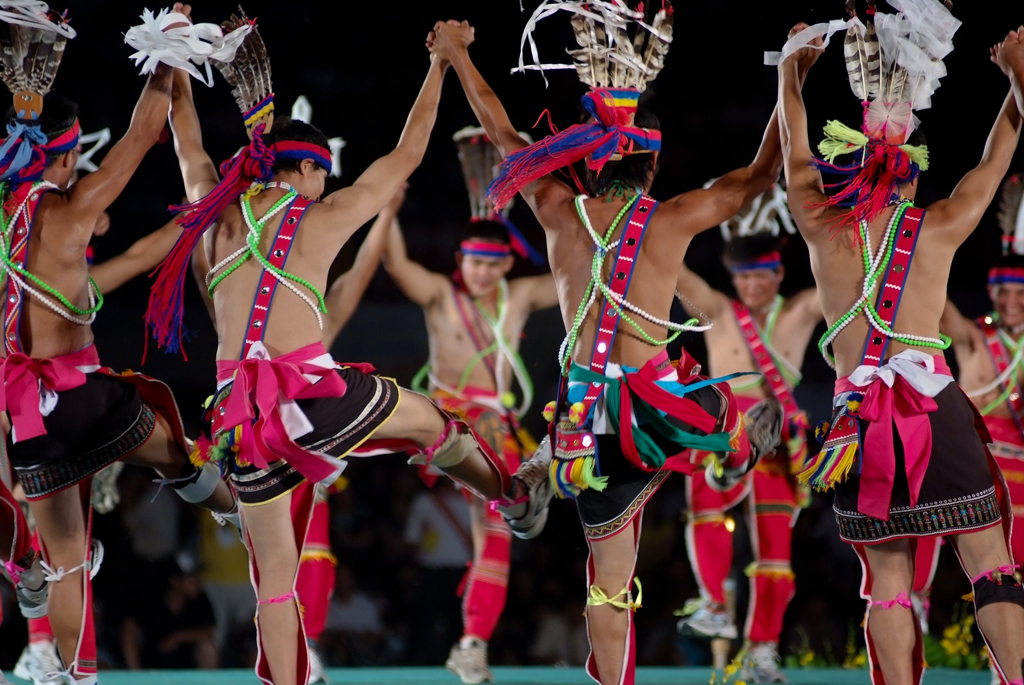 The Harvest Festival is a festival celebrated by the Amis tribes people. With a population of 170,000, the Amis is the largest indigenous group in Hualien. Other than celebrating the harvest, the “Harvest Festival” is also associated with elements of politics, the military, economics, education and training, and thus it is the most important annual event for the Amis.

Right after harvesting millets, Amis tribes people wanted to express their gratitude for what they have gathered, and so they initiated this celebration, which is the origin of the “Harvest Festival.” The “Harvest Festival” is held at different times, and normally, Amis in the Taitung area celebrate in July on the lunar calendar; the one in Hualien area is celebrated in August on the lunar calendar.